7-year-old Chloe lives in fear and fascination of the outside world, boarded up and locked inside their home by her paranoid father (Emile Hirsch). He is constantly warning her of the terrible dangers that should befall her if she ever steps outside – a world where ‘Abnormals’ are a constant danger and people are threatening to kill them – or so she believes.

Despite her father’s best efforts, Chloe is eventually lured outside by the owner of an ice cream truck, who calls himself Mr. Snowcone (Bruce Dern). When this mysterious stranger offers her a glimpse of what’s really happening outside, Chloe soon finds that while the truth isn’t so simple, the danger is very real.

“When the action kicks in, you'll be on the edge of your seat” - Daily Record 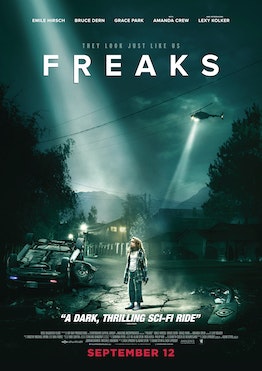